There are a few reasons why continued fractions are much better behaved than decimal (or general base $b$) expansions. All of them boil down to the fact that a continued fraction representation of $x$ is intrinsic to $x$, while a base $b$ expansion forces $x$ to wear a stranger’s clothes.

On the contrary, a number has a finite continued fraction representation if and only if it is rational. Clearly no irrational number is a finite continued fraction; to establish the converse, let $\frac{p}{q}$ be a rational number with $p<q$ and $\gcd(p,q) = 1$. Then the continued fraction expansion for $\frac{p}{q}$ begins \[\frac{p}{q} = \frac{1}{\lfloor q/p\rfloor + \frac{1}{r}}.\] Solving for $r$, we find \[r = \frac{1}{q/p - \lfloor q/p \rfloor} = \frac{p}{q-p\lfloor q/p\rfloor}.\] We have written $r$ as a quotient of integers with denominator $q-p\lfloor q/p\rfloor$, which (since $p<q$) is strictly less than $q$. Reducing $r$ to lowest terms can only lower the denominator further, so it follows that the denominator of $r$ is less than $q$. We may then apply the same procedure to $r$, obtaining a new remainder $r’$ with still smaller denominator, and so on; the process will at some point terminate when the denominator becomes 1, that is, when we reach an integer.

On the contrary, remember that the golden ratio is $\varphi = [1;1,1,1,\cdots]$. This means that $\varphi$ is the most difficult number to approximate by rationals, since $a_{n+1}q_n^2$ grows as slowly as possible. And in fact, you already know its convergents:

For instance, let $\alpha$ be a quadratic irrational. We have already shown that convergents come no closer than $\frac{1}{(a_{n+1}+2)q_n^2}$, and for a quadratic irrational, the numbers $a_n$ are periodic and thus bounded, so we can choose $A = \frac{1}{\max a_n}$ to satisfy the requirement of the lemma.

How could we construct such a number? It’s relatively easy to do it with decimal expansions containing long strings of zeroes, but this lacks a certain panache. Continued fractions have all the pinache. All we have to do is write a continued fraction term by term, always taking $a_n \ge q_{n-1}^n$. Then the $n$th convergent satisfies \[\left|\alpha - \frac{p}{q}\right| \le \frac{1}{a_{n+1} q_n^2} \le \frac{1}{q_n^{n+3}},\] and so $\alpha$ satisfies the desired property, and is hence transcendental.

Numbers having this approximability property are called Liouville numbers, and this was the argument Liouville used to first establish the existence of transcendental numbers. Nowadays this can be proved in a single breath, since algebraic numbers are countable and real numbers are uncountable, but Liouville’s explicit construction is nice.

But non-obvious does not mean impossible. Sometime in the 1970s, Bill Gosper devised an algorithm for computing term by term with continued fractions.

Gosper’s method takes some getting used to, but at the end of the day I’d argue it’s at least as intuitive than typical arithmetic-by-hand methods used on decimal expansions. To compute the decimal expansion of $\alpha$, where let’s say $1 \le \alpha < 10$ for simplicity, one is tasked with computing $d_0 = \alpha\pmod{10}$, and then recursing on $10(\alpha-d)$. To compute the continued fraction expansion of $\alpha$, one instead computes $a_0 = \lfloor \alpha \rfloor$ and recurses on $\frac{1}{\alpha-a_0}$.

To recap: this method allows us to compute term by term the continued fraction expansion for any expression $\frac{ax+b}{cx+d}$ in terms of the expansion of $x$. Better yet, if $x$ is known exactly, either as a finite continued fraction or one with a repeating part, we can compute $\frac{ax+b}{cx+d}$ exactly in the same sense. Better yet still, we compute the function of $x$ term by term via accessing $x$ term by term, so this algorithm can be “fed into itself” in a natural way, allowing us to chain computations together.

Gosper calls functions of the form $\frac{ax+b}{cx+d}$ “homographic,” so that can be our Mathematica symbol for these functions. We can write our logic for computing homographic functions as follows:

Of course, this still doesn’t answer the original question: how to add, subtract, multiply, or divide two continued fractions. For this we have to generalize to what Gosper calls “bihomographic” functions, \[\frac{a xy + b x + c y + d}{e xy + f x + g y + h}.\] If $\frac{a}{e}, \frac{b}{f}, \frac{c}{g}, \frac{d}{h}$ all have the same integer part, then we can write down this integer part and recurse, just as before. If they don’t all have the same integer part, then we have to think slightly harder, because we could expand using either a term of $x$ or a term of $y$. Just about any policy (even random choice) would get to the answer eventually, but one way to do it is to expand using $x$ when $\left|\frac{b}{f}-\frac{d}{h}\right| > \left|\frac{c}{g}-\frac{d}{h}\right|$. The full logic is as follows. 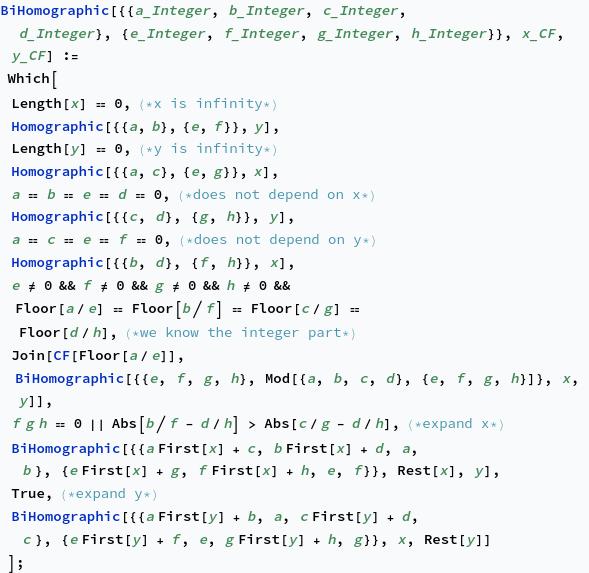 This one algorithm allows us to add, subtract, multiply, and divide continued fractions. We can tell Mathematica this fact explicitly:

Now we can do arithmetic directly with the CF expressions.

A few more definitions allows us to mix in regular rational numbers: 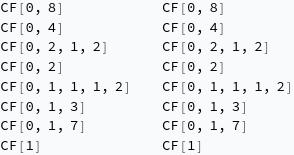 We can tell Mathematica to check when the algorithm repeats itself by passing a cache variable through the recursion. First, with the homographic functions: 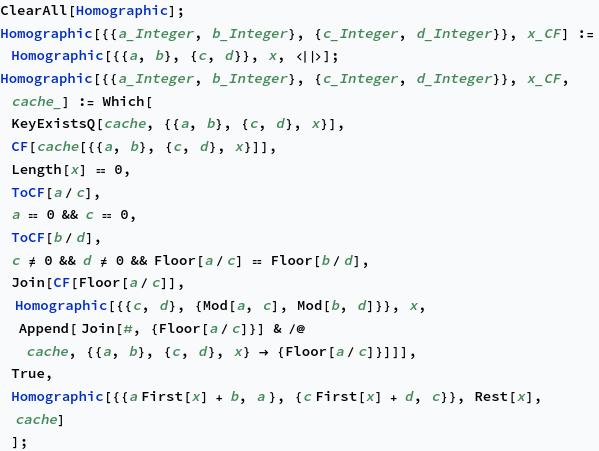 For instance, we can repeat the calculation of $4\varphi$ above:

This is technically correct, but let’s tell Mathematica how to simplify it:

Much better. We can also try a more complicated example, and use Mathematica’s built-in ContinuedFraction symbol to check that things are working properly:

Excellent. Now what about bihomographic functions, for instance to show that $[1;2,2,\cdots]^2 = 2$? We could add a similar cache to the BiHomographic symbol, but there are two issues. First, to compute $[1,2,2,\cdots]^2$, we would first need its integer part – but since the answer is an integer, this amounts to the full computation. Thus, for any finite number of terms we extract from the two factors, we’ll never be able to nail down that the product is 2; we’ll always have the mediant of fractions slightly above and slightly below 2. Second, even in cases where the algorithm can generate terms of the continued fraction (such as for multiplying $\sqrt{2}$ and $\sqrt{3}$, getting $\sqrt{6} = [2;2,4,2,4,\cdots]$), the fractions appearing in Gosper’s algorithm are not guaranteed to repeat, and so the algorithm may not be able to recognize a pattern.

I suspect both of these issues can be solved by looking at recurrence equations on the coefficients $a,\ldots,h$, but this is a problem for another time.

A rectified linear unit (ReLU) is a neuron with activation function